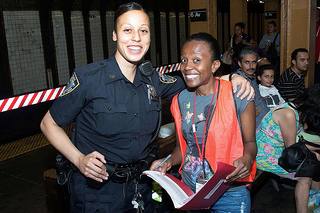 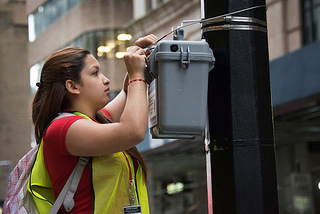 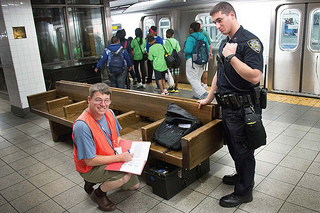 August 1st – For three weeks last month, New York City was the site of the largest study ever conducted of how deadly gases would move through an urban environment during a chemical weapons attack – and students from Bronx Community College were in the forefront of this landmark research.

Twenty-five  BCC students participated in the Subway-Surface Air Flow Exchange (S-SAFE) internship program. S-SAFE was a collaboration between the NYPD, Brookhaven National Lab, the Department of Energy and the Department of Homeland Security, which funded the project. Selected from over 200 applicants, all the BCC interns had grade point averages of 3.8 or above and were undergraduates studying one of the “STEM” fields – Science, Technology, Engineering and Mathematics.

As it spread, the students monitored the rising and declining levels of the gas at keys points in subway stations and adjacent sidewalks. This produced a torrent of data that will help the NYPD devise defenses against a genuine terrorist incident in the New York City subway system. The information is considered so vital to national security that it will remain classified.  Indeed, even the BCC S-SAFE program coordinator, Ms Shaneza Rohoman  and the BCC Chemistry department faculty advisor for the project, Dr. Sheldon Skaggs , were not made privy to much of the sensitive data collected.  All students and faculty participants were subjected to a full background check by Brookhaven.

Perhaps as a consequence of the city’s constant reminders to New Yorkers that “if you see something, say something,” the first test inspired a flurry of 911 calls to the police and hostile reactions from straphangers. However, by the time of the second round of data gathering, the local media had spread the word that the students were battling terrorism, not committing it.

“I’ve always wanted to study science,” says Anthony Gaurinach, a 20-year-old chemistry major, “and this was the perfect opportunity to start looking at what I could do in the field.”   Michael Padilla-Korber, 24, a seasoned veteran of other internships, declares this one “one of the most relevant to our city.” The computer science and math major thinks “It’s good to be part of something so important for our country.”

For Yusi Penala, a 32-year-old engineering science major, the project had deeply personal meaning.  “I suffered through 9/11 when I was younger,” he remarks quietly, recalling being downtown on that awful day and “seeing the plume and everyone running.” Yusi, who was part of the desperate trek to the safety of the Brooklyn Bridge, says of the project “If you can save a few people now and plan ahead of time, it means a lot.

Glenda Delgado, a 20-year-old studying forensic science, describes how “For me personally, as an undergrad, it is an unbelievable experience to participate in an internship of this magnitude – even my mom shows off my badge to her friends and says “Oh, they’re in the news!”

The program culminated with a July 29th ceremony at the New York City College of Technology in Brooklyn. The students presented a compilation of papers on aspects of climate change, another element of the internship. They were each presented with certificates at the end of the program.