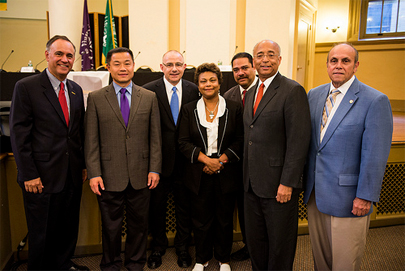 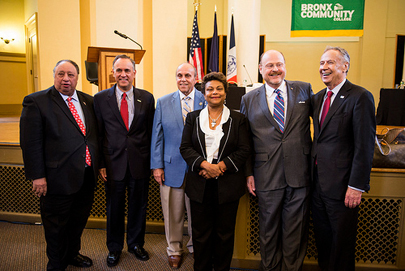 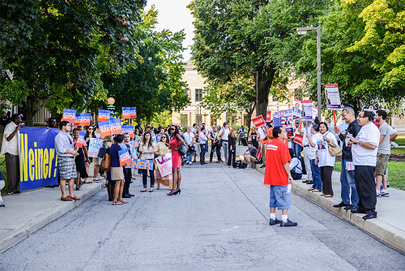 Mayoral supporters line up outside of Gould Memorial Library on BCC's campus, awaiting the arrival of their candidate.

July 29, 2013 — Politics and education crossed paths July 24, 2013 on the campus of Bronx Community College as BCC hosted a lively mayoral candidates forum featuring ten New Yorkers vying to be the next occupant of Gracie Mansion.

More than two hundred attendees, among them students, and two dozen media outlets filled the elegant 19th century interior of BCC's historic Gould Memorial Library Auditorium. The candidates were questioned by a panel that included representatives from BCC, Lehman College and the New York City League of Women Voters. The high cost and low quality of city housing was a major topic for both the Democrats and the Republicans. Catsimatidis pledged to build 150,000 new affordable units if he is elected mayor, Mr. Weiner called for a "Marshall Plan" to improve the condition of public housing, while Comptroller Liu observed, "If we want people to stay in New York City, we have to give them affordable places to live."

When asked to name the city's leading public health problem, several of the candidates cited obesity. Former comptroller Thompson called for a focus on the related condition of childhood diabetes, though like a number of the other debaters he expressed skepticism about Mayor Bloomberg's abortive effort to ban certain sales of large sugary drinks. Mr. Carrion denounced the widespread closing of city hospitals.

In one of the biggest applause lines of the evening, Mr. de Blasio suggested that subsidies to encourage major corporations to do business in New York should end and the money should go to The City University of New York.

The evening was not without its lighter moments. In a "lightning round," Mr. Louis asked the candidates to name their favorite spot for a late night pizza, what songs they had on their iPods, and what movies they had seen recently. The question of "Facebook or Twitter" generated the evening's biggest laugh when it was posed to Mr. Weiner, whose personal issues with micro-blogging are much in the news but came up only occasionally during the evening.